In 1995, the National Institute of Health unvieled "The Visible Human Project" -- a digital dataset containing 2,000 cross-sectional photos of the remains of death-row inmate, Joseph Jernigan.  Shortly following the completion of the male cross-sections, an anonymous woman donated her body for the same purposes.  Initially, the "visible man" was called "Adam" by project scientists, yet the name had already been trademarked by another company and the drier title "visible man" was adopted instead.  However, both male and female datasets are still often referred to as "Adam" and "Eve." 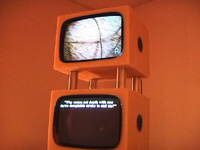 This story highlights the tendency of scientific rationalism to borrow tropes from previous knowledge systems, especially of the Western biblical tradition.  (Similarly, the completion of the Human Genome project has been called "the Holy Grail" of genetic research.) Subdivided...Reconfigured...Reunited is an exploration of how the Old Testament story of Creation might continue in order to rectify the seeming conflict between the distinct literary traditions of ancient Judeo-Christian thought and contemporary Scientific rationalism.  To "fill in the gaps," the installation borrows writings from the Western literary cannon, such as Old Testament, Shakespeare and Milton as well as contemporary cultural and scientific literature.


Physically, the installation is composed of wax-embedded television monitors intended to echo the actual embalming of the two prior to cross-sectioning.  The 3 monitors are stacked (human-height), and a custom electronic switching apparatus delivers appropriate texts and ("Visible Human" and video-probe microscope scanned) body sections to each monitor. 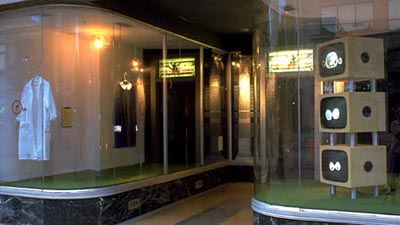 The first form of the project "Subdivided, Reconfigured, Reunited" was a 3-channel, non-interactive gallery work (see first image).  The subsequent version "Paradise Reconfigured", utilized user interactivity (see adjacent image).  Users could switch between one of three narrators at any point in the ongoing narrative--Adam (Mr.), Eve (Mrs.), or the Scientist (Dr.). 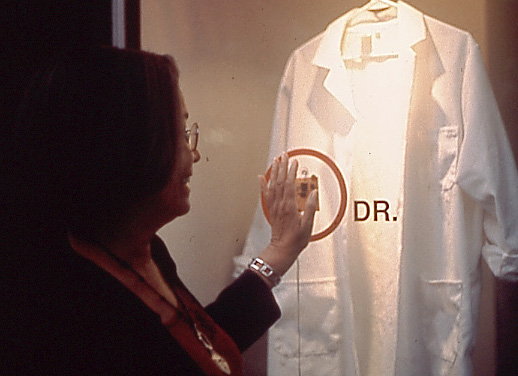 Participants interact with the work by touching areas of the window glass in front of iconic vestaments (i.e. Adam is represented by an actual prison uniform). Custom opto-electronic sensors behind the glass detect touch to alter the narrative portrayed on wax-embeded monitors and exterior speakers.  Other indoor, gallery-based installations of the project used push-buttons instead of opto-electronics.