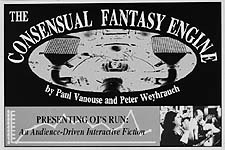 The Consensual Fantasy Engine is a computer program capable of creating a cinematic drama based on audience preferences. The "engine" asks the audience questions to which they answer by applauding for their preferred choice. The engine responds to the applause level by creating a customized scenario for them in seconds and projects it onto the cinema screen. Every 5 minutes the audience is invited to respond and influence the plot. The point of departure for the narrative is the OJ Simpson chase which the audience can transform into a Bonnie and Clyde style road adventure, an intriguing, Film Noir search for the real villain, a suspenseful trial, or any of millions of intricate variations.

The televised O.J. Simpson chase is important because of a distinct relationship that it shows between the broadcast and society. Society's presence as viewers had an impact on both the actions of the police following, and also possibly on OJ's own actions during the pursuit. Our presence as viewers has changed the court's jury selections and even the selection procedure. Most importantly however, our responses to (or public opinion of) the constant barrage of information -- truthful, real, circumstantial or fabricated -- will undoubtedly influence not only court proceedings for this specific case, but will set up lasting metaphors and prejudices which will affect our understanding of future world events. In the future, the OJ chase may become a permanent icon. Whether this happens, or what the chase will represent is unknown. It could be the tragedy of a good man brought down, his triumph over an evil, racist society or a successful prosecution of a cruel murderer with a history of spouse battering. We hope to explore how the media and public have a substantial stake in the creation of such metaphors and meanings.